What is Health Testing??

and Why Should I Insist My Puppy's Parents Should Be Health Tested?? 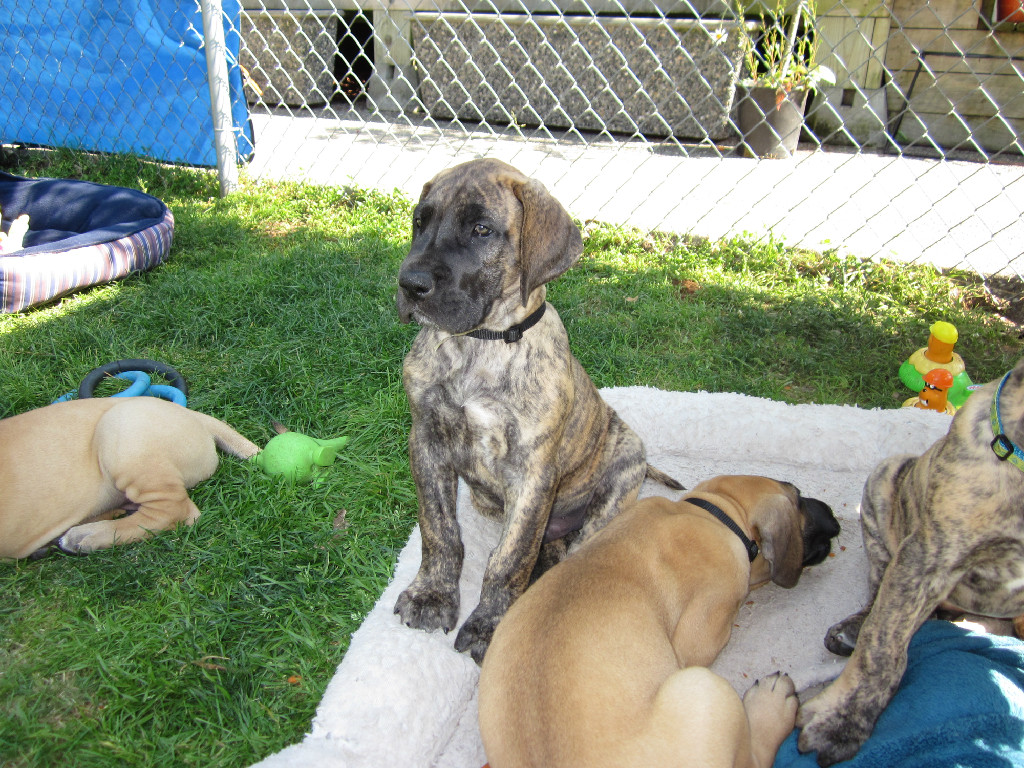 Not a week goes by that I don’t spend several hours talking to a new Great Dane owner who has had a bad experience with their breeder.  Problems range from lack of breeder support (as in, “Your check has cleared, good-bye.”) to misinformation, to serious health, training and/or temperament issues the breeder will not assist with – or even acknowledge.  The frequency of these calls has prompted me to do a “primer” for the potential Dane purchaser so they can be informed and make knowledgeable decisions  in choosing a breeder. Specifically in this article I'm going to discuss the importance of Health Testing of parents prior to breeding.

Appropriate health testing prior to breeding the sire and dam, providing support to purchasers in the event of problems, and removing dogs from breeding programs when they have,  or have produced, serious health, temperament or soundness issues, are extremely important for the welfare of the breed.  Even the best breeders see health issues crop up in their puppies occasionally, that is the nature of genetics, but good breeders do not make health claims they cannot substantiate, good breeders are knowledgeable about the health history of the dogs in their pedigrees and lines—and are willing to share that information.

The term “health testing” is tossed around quite a bit. I strongly recommend the potential purchaser ask exactly what the breeder means by “health testing.”  Some breeders use the term to simply mean the sire and/or dam has walked into a veterinarian’s office, had a quick exam, and was termed “healthy.”    Bingo—for less than $40.00 the dog is pronounced “health tested.” While a pre-breeding veterinary exam is important, it is not valid “health testing”. It does not exam the parents for inheritable serious health issues, which could be passed on to the puppies. You are going to love and adore your new puppy family member, don't you want to do everything you can to insure he/she doesn't inherit serious health issues that could make his adult life uncomfortable or seriously shorten it. Besides the pain of losing a four legged family member, the serious veterinarian bills involved with health issues are well worth taking time to avoid.

Does Health Testing test a dog's genes? At this point, there are no genetic tests available to determine if a Great Dane carries hip dysplasia, cardiac or thyroid disease, or eye problems.  However, what the tests do is to identify dogs that might be afflicted with these problems and enables breeders to remove them from a breeding program.  Additionally, health certifications on individuals allow breeders to view and track, through the OFA site, health history on family members, such as grandparents, siblings, and prior offspring of a dog being considered for breeding.  This tracking of health testing can be a valuable tool for breeders when planning a breeding program.

Why is testing important? Can't you just look at a dog and see if it's healthy? How well a dog looks or acts, or what someone says, are no indication they will pass health testing.  I’ve personally known two dogs that were very active, ran, jumped, played and had no lameness or other symptoms—yet the tests showed they had hip dysplasia.  If hip x-rays had not been done, the disease would never have been found, as those dogs showed no symptoms. But if bred, they would pass the genes carrying that defect to their offspring.  Breeding a dog affected with a health issue significantly increases the likelihood that their offspring will also be affected.  In this case, breeding these dogs would likely produce  hip dysplasia in the litter. Eye problems—cataracts—can be another problem not easy to see without the appropriate health testing.  Breeders who claim their dogs “don’t have any problems” may simply not know because they have not done the appropriate testing.  Health testing breeding stock is important to the breeder so they can make wise breeding decisions.  Health testing is important to the pet purchaser so they can be assured their breeder has done all they can to produce a puppy without health issues.

Why is Health Testing Important?

What is Health Testing?

To serious and responsible breeders, the term “health testing” means the dog has had all the pre-breeding health testing done as recommended by the Great Dane Club of America (GDCA).

Hip Dysplasia, which terrifies dog owners and for good reason, is an abnormal hip joint. This is a painful condition that can drastically reduce a dog's quality of life and is very difficult for owner to watch. Some dogs with severe dysplasia end up euthanized before they are a year old.

There are 2 acceptable ways to exam dogs for Hip Dysplasia, an OFA exam, which is the most common and a PennHip exam.

The OFA exam does not require anesthesia and is simply x-rays taken of the dogs hips in very specified positions. The x-rays are then sent to Orthopedic Foundation for Animals for evaluation.

The second type of exam, more extensive than the OFA x-rays, is the PennHip evaluation. This evaulation is performed while the dog is under anesthesia.

An Eye exam, which must be performed by a board ACVO ophthalmologist, looks at the health of the eye and looks for cataracts and other abnormalities the show up over time. The exam is very simple and straight forward and takes little time.

Heart Issues can be devastating. Dilated Cardio Myopathy (DCM), a heart issue common in Danes, is an enlargement of the heart with thinning heart walls which results in poor circulation.

There are two types of Cardiac Exams, an ausculation, which is simply listening to the heat\tt with a stethoscope and the much more complete and infinitely better, is the echocardiogram exam.

Thyroid Issues can cause weakness, lethargy, weight gain, skin and coat problems, behavior issues and infertility. Hypothyroidism is a common problem in dogs in general.

The Thyroid test is a simple blood test.

The Veterinary and Dog breeding communities work together to improve the health of our pets and these tests are usually not difficult to get. Veterinary clinics offer "Breeder Days" where they bring in vets from multiple specialties and offer discounted fees. The price for these tests in total is usually $500-$1000 per dog. Testing isn't inexpensive and may be part of the reason, when  you buy a puppy from a good breeder, that puppy may cost a bit more. In the long run, when looking at what it costs to keep your pets and the lifetime vet bills, the cost of supporting health testing of the parents, is a very worthwhile investment.

How Can I Check Health Testing Results?

Checking Health Testing results for a dog is quite easy. Get either the name of the dog or the AKC registration number. Any dog that has had health testing done and passed receives a certificate.  Years ago, purchasers were advised to ask to see copies of the certificates.  However, some clever (and unethical) people became very skilled using photo software and simply made their own certificates!  Copies of certificates are not necessarily reliable. The world is full of unethical people looking to take advantage of trusting people.

The very best and most reliable way to check to see if a dog has received testing and certifications is to go to the OFA site.  Once there, you will find an area to put in the dog’s registered name or registration number.  The site then lists the health testing results. You can also see the health history of any family members who have also received certifications. It is important to note, the echocardiogram is the much preferred method of testing for heart issues with a Dane. In the health testing results, make sure the echocardiogram was the test used for the heart exam.

Also note WHEN the testing was completed.  OFA recommends that cardiac, CERF and thyroid testing be done annually.  Once the hips are x-rayed at age 2, they are not going to change from normal to dysplastic, so those results are good for the life of the dog  However the condition of the heart can change over time.  A cardiac clearance on a one year old dog, even using an echocardiogram, is not a guarantee that the dog is not going to develop a genetic form of heart disease.  The same is true for auto-immune thyroiditis.  This often does not show up early in life and if testing is not done regularly, it can be missed.  If the dog should develop thyroid disease later in life, but only had thyroid testing done very early in life, it will be very difficult to know if the thyroid problem is idiopathic (not genetic) or if the dog actually had auto-immune thyroiditis and now has so little thyroid tissue left that the autoantibodies no longer exist. The bottom line is look at the exam dates in the test results, Cardiac, CERF and thyroid should have been completed within a year prior to breeding.

To see how easy it is to look up health testing information, use the following AKC number of a real Great Dane: WS13693201. Go to the OFA site and in the Orange box in the upper right hand part of the screen type in the registration number. This number will pull up the information for “BricarloDaynakin Shut Up N’ Kiss Me.”  From the list of tests, CLICK ON HER NAME to see understandable test results. You will see several columns. The three most interesting ones are "Registry" which tells you what type of test it was, "Test Date" and the far right column, "Final Conclusion". In the "Final Conclusion" column you will hopefully see terms like "Normal" and "Good". If the test results don't appear to be positive, you can the internet to search for more information.

Under the list of tests for the dog you looked up, you can also see get information on Danes related to her.  This will give you information on a specific dog and also the “big picture” of more of her line.  When you find a sire or dam or other dog you are interested in, use the OFA site, put in his or her AKC number and check out the dog and the family.  Not only will this help you determine if the breeders you’ve been talking to have been accurate in their claims, it may help you avoid future health problems with your puppy.